I received a Starbucks gift card a few weeks back, and decided to use it today. I know this is setting up to be a cliche post on why you should take your coffee to work, but I assure you this post will be anything but that. The lady in front of me ordered her drink, I don’t know what it was, I was tweeting. She handed her debit card to the cashier, who happened to be the father of an old classmate of mine, and he swiped the card. As he was handing the card back to her, he jerked it back quickly. “Oops. Didn’t go through. Let me do it right this time,” he offered with a wise empathy. “Hmmm. The computer isn’t liking this card today. Do you have another one?” Her face told the rest of the story.

There’s so much here. I could write (another) book.

Second, he handled that situation like someone who has seen it before. So take the rest of this blog post and multiply times the number of people who were faced with this situation.

I just witnessed someone’s second chance. The question, however, is whether she realizes it or not. I’ve come to learn that many people who are in the search for a financial second chance actually ignore their second chance on a daily basis. I think the problem is  we don’t know what second chances look like. For many, the image of a second chance is a better job, more pay, absolved debt, or even a generous or benevolent person. We don’t realize that a second chance begins with the knowledge that we are doing something the wrong way. Knowledge, when you are struggling, is power. We want rescued by a third-party, but the rescue party is knowledge.

For a moment, let’s make some assumptions. Let’s assume that the lady who’s card got rejected is struggling financially. Let’s say she has a couple thousand dollars in credit card debt, no emergency reserve, and she lacks general financial awareness. I’m asking you to trust me in this hypothetical situation. What technically happened when her debit card got rejected? BTW, I saw the words Debit Card printed on the card when my friend’s dad handed it back to her. When her card was rejected, she was immediately notified that she didn’t have any money. None. Zero. No money. The look on her face connected the dots. This moment offered her an opportunity to change, but it also offered her the chance to explain this moment as an unlucky start to the day. This moment was the second chance she was looking for.

When you bounce a check or debit card, you are crying for help. You may not realize it, but you are. If you overdraft your checking account and your overdraft protection swoops into save the day, you have just been given the coveted second chance. When you were given the first chance, you ran your financial situation into the ground. This is now the second chance. You were just given the knowledge that you ran your financial life into the ground. But this is where things get really weird. Having seen thousands of people in the middle of their second chance, the second chance doesn’t allow the person to get back to business as usual. That’s the point! Business as usual, got you to this point. Your habits, your lifestyle, and your decisions brought us to this moment. YOU made tens of thousands of decisions, and the product of those decisions was failure. Am I turning this woman’s card rejection from a molehill into a mountain? Nope. It’s not a molehill. It’s a mountain. It never was a molehill.

Let’s get practical and less conceptual. Look at Pete the Planner’s Ideal Household Budget (below). 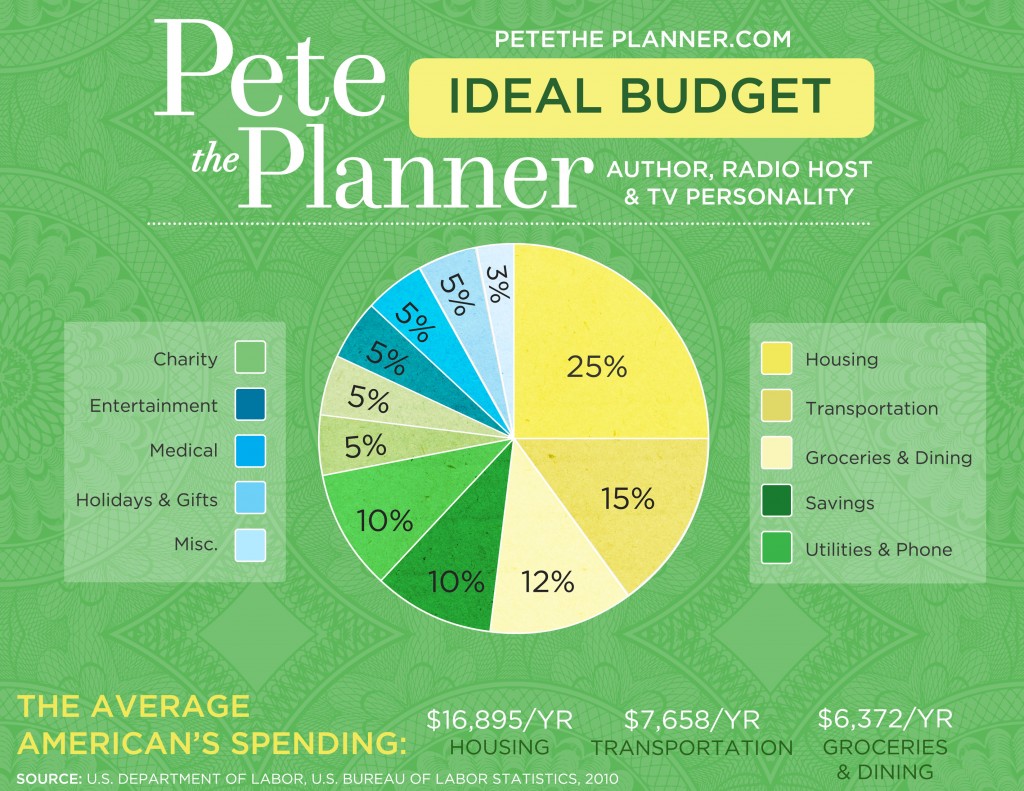 Do you think that the rejection of a debit card is the result of only spending too much money on dining out? If so, you’re wrong. I have never ever ever seen a person who’s only problem is dining out. To be clearer, I’ve never seen a single person who has overdrafted their checking account due to their dining-out problem. This lady didn’t have a dining out problem. She had a spending problem. Look at all the different ways in which she can analyze her spending problem. Does she spend too much on housing? Maybe. Transportation? Maybe. Her second chance starts with the responsibility to understand the depth of her problem.

To take it to the extreme, I’ve seen countless people exit bankruptcy looking for that second chance. The road is long and hard. I don’t believe bankruptcy is a second chance unless significant lifestyle changes occur. You can’t hope to wipe your debt away, and then get back to business as usual. Business as usual created the problem.

So, if you’ve been waiting for that second chance, stop waiting. You want a second chance because you know you have a problem. That’s enough. That’s all you need to start making changes. Remember, the goal isn’t business as usual. The goal is permanent change for the better.

I sure hope that cash register was working at that Starbucks this morning. If it wasn’t, my bad. Oh, and if your coworker complained about getting her card rejected this morning, feel free to send her this post.

9 thoughts on “What does a financial second chance look like?”